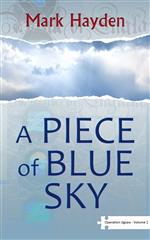 The first part of the Operation Jigsaw Trilogy.

A tragic accident and a suspicious transaction: two small pieces of a deadly jigsaw.

DS Tom Morton and his cousin, Captain Kate Lonsdale, are each given one small piece.

Tom is trying to bury himself in work after his wife dumps him, and Kate wants to know why her boyfriend was in that crash.  As they overcome their loss, they pool their resources to support each other, but they are pitted against a wily adversary who is fighting his own demons.

Squadron Leader Conrad Clarke is ordered to protect the operation – the operation that Tom is trying to destroy. Badly wounded in the crash, he finds himself being forced to choose between saving his life and saving his sanity.

Behind all three of them, the leaders of the gang are determined that no one will ever see the big picture and put all of the pieces of the jigsaw together.

As Kate and Tom get close to the truth, Clarke has to take bigger and bigger risks to keep them at bay, until all of them converge for a showdown in Essex – on Valentine’s Day.

Although complete on its own, A Piece of Blue Sky is the first volume of the Operation Jigsaw trilogy. As well as a cunning plot and a page-turning story, this book creates memorable characters and vivid settings that absorb the reader.